The Thing That Stalks the Fields 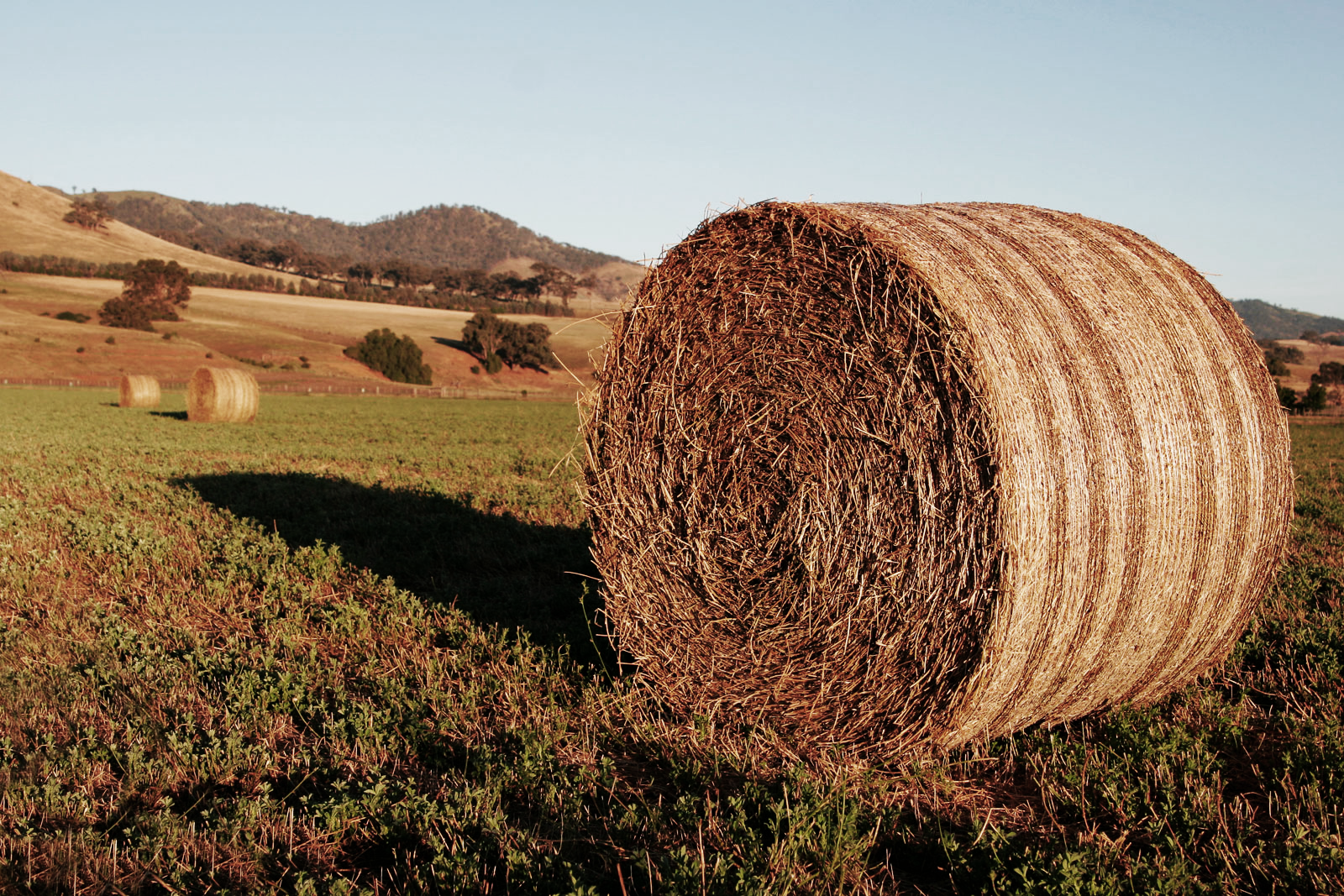 It was a few weeks ago that the hay bales started creeping slowly away from the house. Every morning when I woke up, each had moved a few hundred feet from where it was before. I assumed it was pranksters with nothing better to do, so I ignored it.

Within a few days, though, the bales began to approach the boundaries of the farm. I was tired of the whole game by then, and decided to move them back. It took a tedious hour to bring them all from where they were to over near the house again, and by the time I was done I was ready to snap the neck of whatever little pissant was deciding to screw with me.

The next morning, I found each and every one of my horses messily decapitated. The smell was what woke me up. Each one was slumped over against the side of its stall. There were no signs of the heads. I spent the rest of the day cleaning up the mess and burying the remains. It was only when I was done that I noticed the bales of hay had all returned to their positions from the day before, scattered far out into the fields. This time I left them where they were.

That night I sat on my porch with my shotgun in hand and a pot of coffee on the table beside me. I sat for hours, straining my eyes into the fields to catch a glimpse of who was moving my hay bales. Finally, I was beginning to nod off. I would have, but just as my eyes began to close I heard a clamor and a rustling of trees from the nearby woods. I leaned forward, my heart racing with excitement; I was going to catch the bastard. I fumbled with my gun and fidgeted in my seat, waiting anxiously for whoever it was to get close enough to ambush. It was only when the thing got close enough for me to make out its silhouette in the dark that I was frozen still. The thing that crept into my fields from the nearby woods didn’t seem to notice me sitting there.

It stalked, hunched and deliberate, through the field with the posture of a tiptoeing thief. If not for the fact that it must have towered to over ten feet tall even in its crouched position, it might have seemed almost frail. The thinness of its arms and legs and the emaciated, caved-in quality of its chest reminded me of a starving animal. Still, this thing was undeniably strong, and I watched it hoist each bale up into its arms with ease, and set it down carefully a while away, taking only a few strides to cover the distance. I watched it work, moving each bale thoughtfully. Every once in a while it would straighten up to look around at the other bales’ positions in the field, before adjusting the one it was working on ever so slightly.

Before it left, it looked towards the house. I felt its eyes sweep over me in the dark, but whether it saw me or not I couldn’t tell. Then, it turned silently and crept back the way it came, disappearing into the dark of the woods. It took me an hour before I had the courage to move at all. I went inside after a while, but didn’t sleep that night. It was only when the sun rose that I dared step off my porch into the fields. The hay bales were where it left them. Strangely, it didn’t move them as far as it had in the previous days.

They were approaching something invisible in the fields, and as I looked at them I realized that they seemed to be marking some line. Indeed, as I walked around the house, I saw the distinct circle that they formed with me at the center. At first I thought the bales were just being haphazardly moved away from the house, but now I could see that they were instead being moved towards some boundary. The thing was sending me a message. I slept uneasily that night, and only because I was exhausted.

The next morning the bales hadn’t moved at all. They didn’t move at all for the rest of that week, in fact. They were finally where the thing wanted them. I made myself sick trying to interpret them. Why would this thing expend so much energy moving my hay bales, and threaten me with such violence should I try to interfere? Killing my horses was just that - a threat. An intelligent threat, at that. It knew what would scare me, and it knew that I would understand the implications.

The sound of an automobile working its way along the road to my farm one morning gave me a little rush of excitement. I’d been planning to abandon the farm since I saw the thing, but I couldn’t hope to leave on foot without risking it treating me like it treated my horses. But, if I could get in the car with whoever was coming my way, I might be able to escape before it could stop me. I didn’t know or care who it was. I decided that the moment they stopped the car, I would jump in the passenger’s seat and tell them to get the hell out of here. I didn’t get the chance.

The car worked its way slowly along the road, trundling across the uneven ground. I urged it silently to hurry. It was when it passed between the two bales placed on either side of the road that I began to hear a booming clatter from the woods. The thing burst suddenly from between the trees, sprinting on all four of its terrible, gangly limbs towards the car. Within a few seconds it was there, pouncing on the automobile like a predatory cat. Within moments it was picking and peeling the vehicle’s steel frame apart, working to get at the driver.

The man, whoever he was, screamed all the while and I could hear him even over the crunching of metal and the shattering of glass. It was only when the thing crushed him carelessly in its hand that the screaming stopped. It tossed him away, and straightened up to look at me once again. In the sunlight, I could see the inhumanity of it. It was composed entirely of something awful and alive which was lashed together in a messy semblance of a human form. Whatever it was made of looked so polished and hard, that if it weren’t for the minute writhing of the stuff, I’d think it was made of granite.

The thing retreated back into the woods, and I was left to my shock. My eyes wandered to where the car sat, the engine still sputtering, between two of the hay bales. Suddenly, I understood. The message was clear. I am this thing’s captive, and I am not allowed visitors. Nothing may cross the borders it has set. I’m trapped here, by the thing that stalks the fields, and it demands nothing except that I never leave.

Still, I don’t know if I can handle being that thing’s canary. I’ve been thinking hard for the last few days since I saw it crush that man’s chest, and silence him before he could finish his scream. If I crossed the hay bale border, it’d probably do the same. It’d smash my skull before I could put my hands up to protect myself. It’d go and find a new pet, and probably keep looking until it found someone who could stand knowing that it was waiting just outside, watching it at all hours with its shiny, insect eyes.

I’ve been thinking hard for the last few days, and I might just make a run for it.