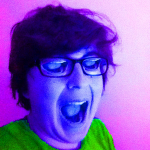 -Hanging out with friends

-Having a hobby that isn't the stress equivalent of Russian Roulette

But ultimately, writing is his passion, and he hopes to make a career out of it one day. He enjoys criticism as much as positive feedback (perhaps more so), and likes to write in the third person about himself.

Retrieved from "https://creepypasta.fandom.com/wiki/User:Ameagle?oldid=1232786"
Community content is available under CC-BY-SA unless otherwise noted.