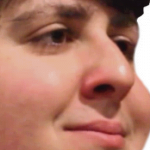 Q: What music do you listen to?

A: I've got 3 terabytes of 60's pre-ambient, 800 gigs of live recordings of this local band called the fuckerfucks. They played only 2 shows before breaking up but I had 11 redundant recording rigs all recording flac which I then layered over one another for 25,000 kbps bitrate.

8 terabytes of the beatles. No not THOSE beatles, the new beatles. They haven't recorded an album yet and technically they're not really a band yet but they're indie-gospel-post-funk-punk style is going to be huge when you guys hear their stuff in about 5 years.

4 petabytes of the Ethiopian Free Jazz wave that occurred in 1973 in a town called Wenji Gefersi.

18 terabytes of sound check recordings from the mid 90's band LFO. They only scored a hit with "I like girls (who wear abercrombie and fitch)" but they were way ahead of their time.

Retrieved from "https://creepypasta.fandom.com/wiki/User:Andytags?oldid=591177"
Community content is available under CC-BY-SA unless otherwise noted.