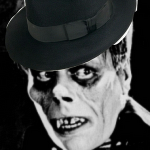 Just now getting into Creepypasta's since my eldest daughter told me about them. In an effort to impress her I started writing a couple and submitting them to the creepypasta.com site. Only one has got through onto the page, but it was the one with both her and her sister's name in, so I'm moderately happy that the world can now recognise them as the evil urchins they actually are.

Despite my best efforts, there always appears to be an undercurrent of dark humour in my writing, but since I have a healthy belief that the world is essentially absurd, I don't think this is too much of a stumbling block.

I've joined the Creepypasta Wikia site since it appears an ideal place to get ideas and some useful feedback on my creepypastas.

My favourite creepypasta is the original Candle Cove. The build up is amazing and so reminiscent of some of the old children's shows I used to watch with the odd puppet characters. Then the bit at the end - still sends shivers down me. Highly recommended.

Oh, and please editors, stop taking the 'U's out of my words i.e. colour, favour and favourite. It's not a spelling mistake, it's English U.K. - don't make me rally up the red coats to come over there and take back the colonies over this. ;)

Since the products of my diseased mind have fallen onto the Netherweb, some kind souls have liked them enough to do audio versions. Of the ones I know about, here are the links:

Okay, this one caught me out of the blue - an actual video of one of my stories! Granted, there are some mistakes and certain liberties taken with it, but still pretty cool someone went to the effort to do this:

Just some of the terrible things that pop into my head:

That last one is for Lauren, since it's her favourite. ;)

Retrieved from "https://creepypasta.fandom.com/wiki/User:CharminglyShallow?oldid=1405406"
Community content is available under CC-BY-SA unless otherwise noted.