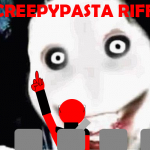 Good day, humanoids. I am Dorkpool, the nerd with a mouth, Klingon-speaking comedian, and guy hoping not to get sued by Marvel. I'm glad you stumbled onto my page, be it by accident, on purpose, or by divine intervention. Why? I have no idea, I just am. I do some writing, mostly comedy, so Creepypasta might be an odd place for me to be, but I'll make it work. (As it turns out, I actually have. Sort of.) Anyway, enjoy your stay here at my little profile. Look around, see if you like anything, and say hi. Oh, one more thing: HAIL HYDRA!

By the way, if anyone's wondering if there is some set schedule for the Riffs, the answer is: hopefully daily.

If you're curious about when the Riff site's been updated, check here:

If you're curious about the Riff site itself (which I try to update daily), check here:

If you're curious about the reviews I'm doing that go by the moniker "Dork Report" (which at this point I just update at random intervals), check here: http://creepypasta.wikia.com/wiki/User:Dorkpool/Dork_Report

Amara: Basically, your simple boy meets girl, boy falls in love with girl, boy gets rejected by girl, boy stalks girl story. However, this story is a poem.

The Decision: A second person story about a person who's conflicted about certain things.

Powerless: A story about a former hero who lost hope in humanity. The first story I've written to keep the name it had in the Writer's Workshop.

Netvos: The basic plot of "Sonic.exe," but with characters who aren't complete morons.

How To Deal With A Haunting: Is your house haunted? Well, Home and After-Life Magazine has some tips for homeowners dealing with a spooky specter sharing space in their abode.

PSA: Demon Summoning: Join the Rock in a little skit explaining why cool kids don't summon demons. (Note: This was on the Trollpasta Wiki, but was deleted for being 'unfunny.' No more elaboration outside of that)

Game Pastas Are Stupid: Sarah Evans's boyfriend is scared of a game. Why? Because he's kind of an idiot.

Have a Nice Rest: While a lame name, "Go To Sleep" was taken. Basically, it's my attempt to write a non-sucky Jeff the Killer story.

Killer Worship: A sequel of sorts to "Have a Nice Rest," this one details what happens when Jeff meets a Jeff wannabe.

Departure: The third chapter in my Jeff series, introducing a foe for ol' Jeff.

Retrieved from "https://creepypasta.fandom.com/wiki/User:Dorkpool?oldid=1251416"
Community content is available under CC-BY-SA unless otherwise noted.