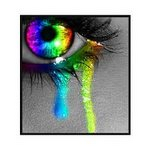 My Obsessions With Darker Side of Society

First off, I love Creepypastas and horror stories and I have since I was very child. I can clearly remember being

six years old and getting up every morning at 8AM to watch Unsolved Mysteries on Lifetime. (For those who don't know, Unsolved Mysteries is a show that showcases all kinds of mysteries. From murder, to disapperances, to things dealing with the supernatural) I will also admit that I have had a borderline obsession with serial killers since I was a child. Predominately ones like Jeffery Dahmer, Fred & Rose West, John Wayne Gacy, Lady Bathory and Mary Bell.

I can also clearly remember these behaviors worrying parts of my family and my teachers, because as I grew older and could begin to articulate my thoughts and feelings correctly I would talk about them, write about them, research them and learn anything I possiably could. I would read books of nothing but horror stories, supernatural occurances, crime records, and often anatomy books too. My school counslor even began having me attend weekly appointments in his office to "Talk about my feelings".

As I am the type of person to answer any question asked, I bluntly answered all his questions and that landed me in the office of a child psychiatrist as it was apperantly abnormal for a child to answer " I am interested in the darker side of society. I want to see into the shadows that normal society tries so hard to ignore and cover up" and show little to no emotion. Despite the doctor thinking that my mental and emotional growth were abnormal, he let me discontinue my visits after I started junior high.

I was a loner all throughout my childhood and adolecent years, and my obsessions with evil and fear often led to me be being ostracized by my peers. Though I genuinely am a nice person, I have always had trouble expressing my emotions and there are a few that I honestly have trouble feeling at all. I have become desensitized to many things as a result of my obsessions and it seems to scare most people away. Not that I mind, I prefer my own company to that of others (with the exception of my husband and close family).

The "Normal" Aspects of Me

My life was hard growing up. Though I am ultimately grateful for most of the experiences in my life, (as they taught me important lessons, though they severely altered the way I think and act) at the time and to a certain extent, now, they were painful and often threatened to tear me apart. I know that the aforementioned obsessions are linked to the things that I experienced as little girl. I never told anyone (except my husband) about what I experienced as a small child, and I don't plan to start now but I will say that I wouldn't wish it on anyone.

There were important events that helped to sculpt me into who I am now, some I can share, others I cannot.

I was not a planned child. I was an accident, a mistake. My mother and father did marry, because they did love each other, but they were young and immature. I was, in all honesty, their practice child. I was the one that they learned what to do and what not to do when caring for a child because they refused all help. This resulted in me obtaining many injuries, some serious and some minor. Ranging from multiple car accidents, semi-severe burns (which I luckly have no scars from), almost drowning, and climbing up ladders to the roof.

When I was two, my brother was born and three days later, my father was murdered. I cannot remember my father, but I carry on his looks (as we are nearly identical) and mannerisms that I know caused my mother a lot of grief. It was after his funeral that my mother dropped me off at my paternal grandparents and left.

The next decade, from the ages of three to twelve, I was bounced around from my mother to my grandparents. Changing houses and custody every few months. I was often left alone, with no one but my brother (and later my younger sister) for whom I was to care for. I grew up fast, and did not get the chances to play and interact with other children. It was then that my obsessions began.

When I was nine, my sister was born. I raised her because our mother and her father would rather party than stay at home to care for us. My mother had been lost in her own delusional world since my fathers death and even when my sister was born she didn't try to get help. Then when I was eleven, my sister died. I closed myself off to all emotion and refused any advances made by other people and shunned human contact. My brother says that was the day I stopped smiling at all.

When I was twelve my youngest brother was born, and I also met someone that changed me forever. I met a boy through a mandatory school project and we began to talk. I craved real human contact for the first time a long time. When that school year was over, I realized that I would probably never see him again. I was devestated and once again returned to my shell. Then a few months later, when I was thirteen, I got an email from the boy and our friendship renewed. Within a few months after that, we were dating. My second sister was also born later that same year.

When I was fifteen, two years after I began a realtionship with the boy, I could no longer live in the house with my mother. There was no room for me anymore, physically and to an extent emotionally. Though I was the only care giver my siblings had known, I decided that I would leave and hoped that perhaps my mother would finally grow up. Thankfully, she did and I moved in with boy I was with and his family. His mother hated me, she was conivinced that I was a gold digger (despite them having no money either) and that I had brainwashed him with sex. His father just didn't like me, I don't know why.

When I was sixteen, just before my seventeenth birthday, and four years into our relationship, the boy and I were married. Contrary to what many believe, I married him out of love and nothing less. Later that year, he joined the military. My youngest sibling, a sister, was also born just before I was married.

Now, I have been married to my husband for two years and we recently moved to Florida. The total six years I have been with the man that became my husband were the happiest in my life. I wouldn't trade them for the world. He understood everything about me, my past, my obsessions, my feelings and actions. He defended me against his own family and continues to do so, even though he never had too.

I know that I kinda just went all out on spilling my guts, but I assure you I did it for a reason. It feels good to rant and get things off my chest and since no one can actually know who I am unless I actually tell you. So yeah. I can vent without the people around me knowing about my past and that will avoid questions that I would not be able to answer.

Retrieved from "https://creepypasta.fandom.com/wiki/User:Erebella?oldid=688259"
Community content is available under CC-BY-SA unless otherwise noted.