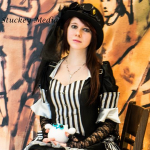 Alright, so, I guess this is just the basic shit here, sooo yeah onward my friends and let the reading commence!

Favorite Food: I love food.... but it doesnt like me back, so I can't have a favorite!

Favorite Color: Black :3 (it matches with a lot of things!)

Would I'd Like to Get: tattoos, belly button piercing, snake bites, tongue piercing, colored contacts, and A LIFE

Dislikes: annoying people who dont know when to shut the fuck up..and being ignored

Fears: Being alone, the dark, needles, clowns, heights, being underwater for too long, small spaces, spiders

Other stuff: I've had 1 boyfriend and it lasted a week.... Cool right? No? Ok.. Anyway... I've been in band since 5th grade. I'm currently in a trade school, and we are doing welding right now. I impressed my stepfather and my instructor with my welding skills, and...well, yeah, I'm special. I'm a giant clutz; I have so many scars I can't tell you where half of them are from! My eyes change color, and its fucking creepy as all fucking shit!!

There are a lot more people, but I can't remember them all right now...and yeah, notice how most of my friends are guys...hmmmmmmmm.

Retrieved from "https://creepypasta.fandom.com/wiki/User:Kitty_Dark_Angel?oldid=727146"
Community content is available under CC-BY-SA unless otherwise noted.