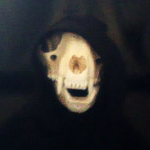 What can I say? There is a driving force behind us all, usually unknowable to any mortal. Although, sometimes, just sometimes, there are individuals who can get in touch with said force. You probably know what I'm getting at here...

I am not one of them.

But, it could be worse. I could be a mindless drone, going about the motions til I reach my grave.

And now, a word from the voices whispering in my ear...

Retrieved from "https://creepypasta.fandom.com/wiki/User:The_Chaos_Puppet?oldid=693496"
Community content is available under CC-BY-SA unless otherwise noted.