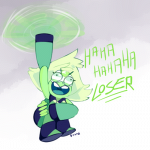 (Picture credited to n0rara on Tumblr.)

Hello, my name is Tin77! I am a boy, and I am an active writer looking to improve his stories. I am a fan of horror and Creepypasta in general, and I'm in almost every fandom you can imagine. I will give feedback if asked, but I am often a really kind reviewer, unable to tell you your story flat out sucks.

My writing tends to come in bursts and then dwindle, so you may see me inactive for some time.

The Fear of Knowing - A man awakens to find himself surrounded in complete darkness, without any recollection of the past. He then tries to use his own imagination to discover the truth about his mysterious disappearance, but this proves to only worsen the situation. Nominated for PotM.

Project WILD - How far would you go to get something you want, knowing it would help improve your life? This is the question a man faces as he plunges himself into sleep paralysis in hopes of obtaining a lucid dream. The lines of reality and fiction begin to blur, and doubt is soon raised at what is truly in control of the situation.

The Fermi Paradox - At the brink of humanities destruction, the survivors look towards the stars. Luckily they will find something. We can't be alone, right?

Nightstalkers - Some stories need to be told eventually. A look back at an unusual encounter with a young boy in the woods, and the story that he told about his inability to make friends at school. As he continues to go on with his increasingly sinister tale, the inconsistencies prove to be troubling and raise even more questions.

Yes, it is rather long, but there are so many stories out there that are truly excellent, well-known or underrated. I really suggest you check out all of these.

Psychosis - A real classic which sends shivers down my spine every time I read it.

Bedtime - Only Creepypasta ever to actually scare me.

An Egg - A pasta to make you think.

String Theory - Another pasta that raises question I don't want to answer.

The Strangest Security Tape I've Ever Seen - By far the most creative pasta I have ever read.

Sheltered Life - A story which isn't scary on the surface, but what it implies is absolutely terrifying.

Tulpa - One of the most creative monster stories ever.

Funnymouth - Slimebeast at his best, with a clever, sarcastic, and horrific masterpiece.

60 Second War - The perfect blend of horror and comedy.

The Sandman - Worries me a little.

Penpal - A legendary story which will go down in history. Stephen King material right here.

Burgrr Entries - Disgusting, weird, but by far the most creative thing to come out of this site.

The Comfy and Cozy Cabin - Sad, but in a horrific manner.

There's a Man in the Woods - I had no idea this was actually on the wiki until now. One of my favorite poems, and has great pacing.

Bad Dream - The perfect example of how to write a micro-pasta.

Candle Cove: Day of the Dead - Only spin-off which got the original concept right.

7 Minutes - A story about time and how little we have of it.

Room Zero - What Abandoned by Disney should have been.

And the Beat Goes On - My worst fear realized in a imaginative way.

The Showers - One of the best stories to win PotM, and definitely one of the scariest out there.

The Long List - A creative story about a detective and a ghost.

The Buzzing - Another good story by a good author.

Afterpeople - Slimebeast's endings are either really good, or really terrible.

Black Hole Sun - One of my FAVORITE stories by our admin Empy.

Solomon's Key - A perfect combination of horror and comedy with a sweet message at the end.

The Endeavor - I've mentioned on this never ending list that horror and comedy often mix incredibly well when properly done. Now here is a little sweet story doing just that.

Cry Baby Lane - Look how EDGY I am!

Candid - Think "I found a Camera in the Woods" but worse. At least it inspired a good Youtube adaption of it.

Goosebumps Lost Episode - While not as bad the others, it fell flat for me.

Clockwork - Jeff the Killer but worse.

LIARS - A great example on why the "Jeff-formula" should never be used.

Mr. Mix - The ending is quite funny actually.

GameGrumpsBarry.exewhatever - I stumbled across this on accident, as a joke made by a friend. I thought it was a joke at first.

Sad Kitten - What was Slimebeast even going for here?

Water World: No Escape - After days of trying to remember the title of this one, I finally remember it. And it is bad. Really bad. You should NEVER use offensive imagery for shock value. Ever.

Super Mario 128 - A generic video game pasta, with a lot of cliches.

This is just an area to organize my thoughts, figure out which ideas are good and which ones aren't.

Written or not, this is where I put ideas AND stories. There may be a lot of unwritten things here, but I definitely like to keep track of my ideas.

Entropy - Our day to day lives seem like torture. We repeat the same thing every day, with small variables stuck in between. This follows the chaos and randomness that follows a man as he grows tired of his day to day life.

The Marks on the Shed - A boy is troubled by the sudden damage appearing on his dad's shed. As the supernatural unfolds, it appears to be something more sinister is afoot.

Paranoia - Follows a disease that spreads like wild-fire, and the paranoia of what it is doing.

Dead End in Durville - An adult man begins to think of the more sinister legends in his childhood, and realizes a horrifying connection.

The Field - Based off personal experience, a story about a small, unknown town which dwells near a large field. Follows a runner and his experiences in the field.

AFK - An internet horror story about a young girl who is researching predators on the internet.

Out on the Farm - A group of rich friends gather for a house party on the farm, but one of the children begins to act strange, spoiling the party.

The Witness - Currently rests in development hell. Follows an investigation in a suburban community, and the oddities of the towns-folk, and the killer himself.

Don't Kill the Machine - The strangest story I have ever written. A computer thinks about humanity. It is not pleased.

Retrieved from "https://creepypasta.fandom.com/wiki/User:Tin77?oldid=1230200"
Community content is available under CC-BY-SA unless otherwise noted.