Hi, welcome to Creepypasta Wiki! Thanks for your edit to the User:WhyAmIReadingThis page.

i am going to add more...last night was just a rought copy

Yeah, I'm sorry about the spaces. It annoyed me too, but the program I wrote this pasta in didn't stretch out that much. Now, to explain a few things to you:

The three murders on Halloween wasn't meant to be explained. You have to remember that in the very beginning, Autry didn't like the journal. He hated it, and didn't care about writing much in it.

The hacksaw is also meant to seem strange or out of place, to give the reader a feel that none of this is right at all.

Also, if you haven't read Diablo 2 "Curse", go do so now. It is another part of the story.

Hello. I would just like to thank you for helping edit some of the pages I added. I was having a little difficulty trying to pretty the page up.

Hi. thank you for editing my page. I was rushed while writing it and it was my first pasta thanks a bunch for editing it.

My creepypasta Classroom X6 is still in construction, just so you know

Thanks for editing Sunnytown, I copied it from my Word document, and it got screwed up. I tried editing and fixing it, but when I released it, it was left in same state as before the edit.

You have been given an automatic 1 day block from editing because you have not updated the article listing with your new story/stories. This has become a MAJOR problem, and seeing as ALL THE RULES AND REGULATIONS are posted to your talk page as soon as you edit a page (AND I KNOW YOU GET NOTIFICATION OF THIS) there is no logical excuse not to have updated it.

See this rules post and these two tutorials for more information.

RE: PLEASE BE AWARE:

Please check your own talk page in the Spinpasta Wikia, SloshedTrain. While you haven't ever checked it, it is the only way I have to contact you.

Easy link for you: http://spinpasta.wikia.com/wiki/User_talk:Sloshedtrain

Do you know what te rules are pertaining to video game related pastas?

Ok thanks mines about bioshock so I'm not sure if its allowed or not... Hell ill just post it and see what happens

I see what you're saying and I have thought about using the fix tag but I don't really know when I should use it. It always seem like something can be improved, like it's not really yet. I'm a bit hesitant using it. Lemmy118 (talk) 15:01, March 30, 2013 (UTC)

Congratz on mod! Even though this is two days late!

Some advice on reverting edits

When there is not the option to rollback undesirable edits, rather than meticulously undoing each one, just look back in the page's history for the last version of the page (the one before the vandal came along) and publish that.

When you use a talk page template, please substitute it via the "subst:" keyword and put your signature directly afterwards, so it should look like this: {{subst:Template name}}~~~~. See {{#NewWindowLink:Thread:120252|this thread}} for further details. UPDATE: Moved to {{#NewWindowLink:User blog:LOLSKELETONS/ATTENTION ALL SYSOPS (AND VCROC MEMBERS TOO)|here}}.

When I was editing the page with the BAD template, it was already there, I was attempting to fix the wall of text issue, I wasn't adding anything. HazmatMagician (talk) 00:06, April 4, 2013 (UTC)

Can I try something else other than Pastebin???? —Preceding unsigned comment added by LolCats1234 (talk • contribs).

If I make an edited version using Pastebin,what do I do?

I spellchecked some parts and adding bits more. By the way,do you critique stories?

Please sign and date your talk page posts by typing four tildes (~~~~) or by using the signature button.

i see ur handsome face

It seems like you tagged my creepypasta. Well...it's fixed so take a look. If there is anything else wrong,explain me.

Well so how am I supposed to correct it? It's my first creepypasta

Thank you for the tips.

First of all, there is no such word as derogarotive. And if you mean derogative, it wasn't derogative. I watched both movies and enjoyed them. By calling one of them 'less gay' than another I've meant that it's worse. And more gay would mean better. I guess I did made my point, but as far as I know, there are no unbans in this chat. Owell. Still. Give it a go. AlexHawks (talk) 09:26, April 6, 2013 (UTC)

Advice on how to deal with vandals

I know your warnings have good intentions, but it really isn't necessary to warn vandals. In fact, it can sometimes be counterproductive. Since vandals seek attention and are NOT editing in good faith (read: they deliberately try to deface a page/pages as a means of seeking attention and sometimes petty revenge), it is best to just revert their edits, block them to prevent them from doing any further damage, but otherwise ignore them. Also, while reverting/blocking, make sure to show as little emotion as possible. I know you probably don't have a problem with this... just making sure you are aware. The idea is to give them as little pleasure as possible from their vandalism edits; don't feed the trolls.

Since VCROC members cannot block, you should use this template on one of the head's (who are all admins) talk pages.

CliveKoopa (talk) 19:33, April 9, 2013 (UTC) So what categories could I put it in what would have similar type of stories? I've seen a few Hypno stories what involve kidnappings and similar stuff?

I saw my creepypasta was removed for being a "spinoff". I was not making my CreepyPasta a spinoff. I was not inspired by any pasta like the one I wrote. I wrote this because I was thinking of making a CreepyPasta out of my idea of a haunted Parappa rom. Is there a way that I can restore it or reupload it? (I have it saved in my desktop)--GamingForTheKids (talk) 18:42, April 10, 2013 (UTC)

Thanks for deleting "Nightmare In Dreamland". I accidently published it not realizing that I did, and was trying to get rid of it without knowing how. Sorry about that, I didn't mean to waste your time like that. NemesisToDarkLuigi (talk) 13:48, April 11, 2013 (UTC)Jay/Fam

Hey WhyAmIReadingThis, it's me Adam. I know I've disappointed you, and I know you're mad at me and I feel bad for neglecting the rules. I know I deserve this and I take full responsibility for what I did. I promise I'll follow rules next time and this won't happen again.

I Hope You Can Forgive Me,

Then how the fucking hell did you delete my creepy pasta.

What the hell ever jack ass, if you are a "Bot" as you claim to be, then how are you comunicating with me?

Hey you recently moved one of my creepypastas from the article listing, can I ask why?

If my story isn't in the article listing I will get blocked wont I?

Hey Thizzy, it's me Acie. I was just wondering what time will my ban expire? It's already been a week, I got banned last saturday around 8 PM in my place, and it's already 9:00 PM here but I still can't enter chat. Thanks for the info :D

Why did you delete my pages?

Why did you delete my Jane the potato

I had feared this situation would come up sooner or later. I had thought up a new name shortly after I posted the story. I chose the name: The Black. I checked, and if people didn't screw up the order, it should be available. If it's not please let me know and I'll come up with another one. Thank you for your time. GL HF out there!

In case you need it, here's the link to the page: Darkness (D00MED2CREAT)

well can u bring it back cuz i had to copy cuz i was adding my story to article listing on trollpasta wiki Im the Werepire King 15:12, April 24, 2013 (UTC)

For my "unfinished page", if it's the story "just a dream", It's done. I know it's Phenomenally short but, it's meant to be that way. Thank you for your understanding. D:

At least you get the pastas last sentence! Thank for your concern. You're really making this a better place!

ok..... its just i'm going through a really hard time in life, and i'm depressed all of the time, and i'm always bored

The page I wrote that you just labled as Unfinished is actually finished. It is supposed to be the start of a series of articles, and that is the first one. The last line was actually reffering to new articles. So if you could, please un-label it as unfinished. Tandem Exitus (talk) 21:35, April 29, 2013 (UTC)Tandem Exitus

Yeah... I do not know If I will be back though.

Just isnt working anymore, so  I am quitting for a while. I do not like most of the people here anyways... Sorry. 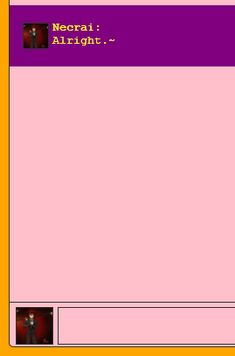 I'm just here to say, my chat is fabulous. Necrai

why are you deleting my story 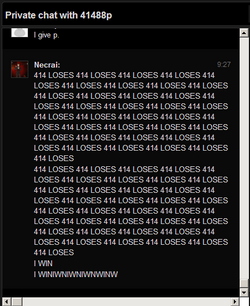 414 lost the war. this chat is so overly streched it's not even funny. Necrai

I am new to this wiki, and I have heard of a lot of people who get blocked due to some Article Listing stuff. If you may, would it be okay if you could explain the Article Listing to me? I have a friend who constantly gets blocked because of this and I just want to clear the confusion. Thank you for your time.

Hey man, the way I usually post is I first write the story in microsoft word then copypaste to the artical if there is a more efficient way to do this let me know, i'm a little knew here, best wishes.

Okay. I'll try to stop getting angry. I'll instead, leave constructive critisicm to help the pasta users. I just get annoyed by the fact people STILL don't know how to make creepy stories. Thanks for telling me, otherwise I would've become a rage pot. Let that be lesson for you! (talk) 00:56, May 12, 2013 (UTC)

I sincerely apologize for the thing I said on the chat that gave me the 1-day ban from it. My explanation, is that at DoodleOrDie, you get an description of what you must, well, doodle. The descriptions come from other players, and they're also descriptions of previous drawings, creating a doodle chain. (the chain starts out with either an description, or doodle) What I've received, is, and I quote it in 100%:

"Creepy Game Grumps with this title:

"[Homosexual]m Grumps" and these names:

"Ego[masturbation]tor" as Egoraptor and "Joomp Troomp" as Jon Tron". That quote is what I would work with, so I didn't want to change anything.

Again, I screwed up. I should've write it in a different way. And again, I'm sorry. I understand if you don't unban me, and its okay, it's just a 1-day ban. I just wanted to explain myself, and since I have a pair, to apologize as well.

If you've read this, thank you.

PS: How to make a custom nick signature? I've never caught up with that one, and I'd love to.

I am promoting you to administrator! Due to overwhelming support of the community, and a very good record and edit count. Congrats.

Congratz on the promotion you fucker!

Hey, the power had already gone to your head! This will be fun :D