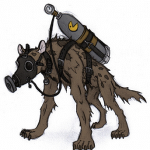 Can I have the story we were talking about for my pasta a few days ago? I'm going to give a shot at writing it over my Spring Break. It'll probably suck, considering I am terrible at writing in general, but I don't know how bad it will be untill I do it. Thanks!

I think the general story was that:

In the PMD universe, contact with a large town has not been made for many days, a large team are sent to find out what is going on, the team discover a number of corpses of various 'mons as they get closer to the town. The bodies appear to have a greenish tinge to them, and have not seemed to degraded at normal rate.

The team reaches the large town, only to find it wrecked with the population all missing or diseased. Realising that they may be here for a while, they set up a camp in the middle of the town. It is soon discovered that the the trail of destruction seems to start on the side of town where the burial ground is located.

When they enter the burial ground, they notice a large hole in the ground as if something small had hit the ground at a high velocity. After searching the hole they find something, a rather large urn-like object. They take the urn back to the camp that they set up in the middle of the empty town, a few remain at the camp, with majority of the team continuing to look for suvivores for the rest of the day.

Later in the evening, the team return to the camp only to find it wrecked and the ones that remained either missing or dead. They decide that the urn must be the cause of the destuction, so they devise a plan for a small team to take the urn back to the far side ot town - where the burial ground is located. While rest wait for them at the town's entrance for them to return, so they may leave together before they become the next victems and to warn the rest of the area about what happened.

As small team take the urn through the town, they notice a number of figures shambling towards them. Panicking they move as fast as they can, looking back they also see a large amount of the figures heading towards the gates, where the larger team are located waiting for them.

The smaller team reaches the burial ground, only for them to slowly be picked off by the undead that begin crawling from their graves. When the last remaining 'mon reaches the hole and pushes in the urn, they acidentally fall in too. As they look up at the undead faces that loom over the opening of the hole, with the ambiant noise a mix of undead groans and the attacks in the distance from the larger group at the gates, they fail to notice that the lid of the urn behind them has come unstuck. The last thing they do see however, is the grim zombie face of the buryman forming from the ashes reaching out to them...

Here's how I would envision how the story would play out, sorry for the wait and the spelling errors.

Thanks, dude. I honestly don't know how to incorporate the Deoxys virus into the story, so I'll probably go with my "Buryman=Zombie" idea. Also, I have no idea on how to start it. If I could figure out the time difference between us, I could possibly arrange a time where we can meet on the chat to brainstorm.

Thanks for doing it, dude. Hopefully, I'll be able to get around to it soon.

Pasta of the Month

Basically, besides what I said, I felt it was neccessary to do a do-over. Cleric wasn't pleased by this, but nothing of consequence happened. I'm still left wondering if I made the right decision though.

BTW, why do you blank your talkpage constantly? Seems like a thing that would get you into a lot of trouble :L

Can I please be allowed back into the chat section? I got banned at the beggining of the year for spamming the first 2 lines of hello kitty's funhouse theme song... Devincooper64 (talk) 02:39, September 23, 2012 (UTC)

I understand that I have been banned until the 21st of December for telling Hood to "Get the fuck out" after he said bye to me, but this is a mistake. I also understand that you banned me up until that time because I explained the chat was taking up my time, but I've finished what I wanted to do, so I can return to the chat now. I find it harsh to be banned for 3 months because of the action I made towards Hooded, but I've often said "GTFO" to a lot of people when I leave, and it's not meant to be taken seriously. It's like how Cheese Lord tells Oblit to GTFO when either one comes on. I understand that now it can't be taken as a joke, and I don't expect you to say "Oh, it was just a joke, that makes it magically better." but I would just like to say that it was not meant to be taken seriously, and I will gladly give my apologies to both you and Hooded on the Wiki chat which I hope you'll both accept. I would like it if you would kindly end or shorten the ban given to me. Thank you. The King of Waffles (talk) 20:28, September 23, 2012 (UTC)

gtf on chat Imagine every molecule in your entire body spontaneously exploding at the speed of light (talk) 14:07, October 14, 2012 (UTC)

Retrieved from "https://creepypasta.fandom.com/wiki/User_talk:Bushcraft_Medic?oldid=231425"
Community content is available under CC-BY-SA unless otherwise noted.