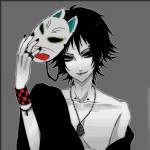 Hi, welcome to Creepypasta Wiki! Thanks for your edit to the User:ChaoZStrider page.

I have taken the time to fix your title, as only admin and rollback users may modify titles. Because of this, I must ask that you adhere to the standards of titles, as set out in the rules about titles.

I had an idea for another Collab pasta, find me in chat if you are interested.

You haven't been on chat in forever, you alright man?

i love your profile pic!!! i <3 vocaloid

I'm sorry this is so late, but congratz on mod, you deserve it!

You better get some fucking wifi in be in chat soon or so help me I will burn all the bacon and throw it into the ocean.

Dick Sword, when ya getting wifi back? I miss you ;~;

The feels I feel. Well at least I will be able to see you.

Sorry if I bother you with this, but I've already had two days of being banned of chat.

May you PLEASE, PLEASE, unban me. I choose not to be that lonely for so long.

Also hope everyone and everything in life is going well cuz you're one of my favorite Mods here.

strider will you undo my ban, sarah made  it a 3 day ban and i think that was completely unfair considering you and  lol skelly only did two hour bans will you plz remove it (jeffsson)

What the fuck's up with Evra?

Sectoid needs help with a wiki and Critic is being an ass, I tell critic to stop

and Evra goes and fucking gets all over my fucking back!

Bans me for that shit. See if I ever get the fuck back on here man. I'm sorry.

I appreciate that ya did what you could, but this site is too fucking one sided and stands up for all the wrong people.

He, Evra, has a personal vendetta right now, I didn't sass him didn't violate any rules, he didn't kick-warn me, or do anything.

YEAH, I fucking question this.

Gonna take it to Reading.

I never believed shutting down chat was a problem-solver, but I was in support of the idea. I personally think that though shutting down chat for a short period of time won't solve any problems, it would stop them from getting worse while we think of a more concrete solution.

I don't quite understand what happened, I had looked at/ still have to look over the logs.  From what I can tell, both the mods and the regular users (in general) have a warped idea of what the chat is.  Everything is taken to dramatic extremes.  (I've been guilty of this before)  And really?  1000-year bans?  Talk of rebellion?  Mass whiteknighting?

((Proposal)) A few things should be pointed out to all users:

Chat isn't a democracy.  It's not always about what's "fair" or what a majority thinks is "right."

Chat isn't a country or region that's ruled by mods and populated by regular users, as some think.  So think about it:  What's a French Rebellion to the staff going to accomplish?

I also recommend that CPW staff keep an eye out for additional issues involving users, and admins/ mods keep an eye on other mods.  More importantly, I recommend that the staff communicate and reset.  It's not necessarily because admins/ mods may not be doing their jobs.  Maybe it's just me, but I feel that CPW staff is broken up somehow.  Users in CPW staff should operate on the same frequency, share ideas, discuss situations, consider solutions, have a basic common vision for the place, compromise if necessary, and not carry internal conflict -- that way, we act as an actual staff.  I feel like every admin/ mod (well, not every...) has a different idea of what they want the chat and site to be like. (Well, maybe not site as much)

Hopefully that wasn't too dramatic :/

Also, please note I've been absent for some time;  I may just be confused.

Hi, ChaoZStrider you banned me from the chat when I said I was 11, but I'm actually 22; I wamted to see what would happen

Seriously I am 22 look on my email. By the way, it is king ciaran17

What the fuck is your problem?

3 Days? What the fuck! I'm contacting the staff about this asshole

As I said, you did it for personal reasons, not for the rules.

Hey, could you take responsibility for your transgressions now?

I'm waiting to appeal for the ban, come here.

You know, I didn't threaten anyone in chat nor did I harass. In fact, you were harassing me.

Can I ask what I was banned for? I didn't break any rules.

Why am I banned for the racist crap?

2. I meant to use it as a form of expression.

3. Again, words have no meaning unless used in context, and in this context, I met to use it as a form of expression.

It'd make sense, in my opinion, to have banned me and Muck if we were openly saying the actual word with the intent to be racist.

Plus, what the fuck; I'm black, dude. Also, if you wanted to ban me for the stupid shit before with the 'transphobia' accusations, then you coulda just told me. Stop drinking the haterade and start drinking the bubble tea!

What the literal fuck

At least you arent banned for three month (I am).

hello, your very good at this. how many are originals? and can ou make a crepypasta with 2 people?

What does socking mean

I still cant find the definition of socking

in the urban dictionary its something inappropriate

I will just make another account and ask the people in the chat about it and than you can just ban that account because I dont know how to delete my accounts. The name of the account is DeathIsPeaceful

I should have replied back to you sooner, but I finally came here to tell you that I am not a sock of HeWhoDiedHere. I can prove that I am not with this evidence:

First and foremost is that while I know him as a friend, he left my house seven months ago, of which a period of both me and his abscence was noticed. He is now living in Baton Rouge, however I will not give the specific location, as I don't want any harm intended to come to him whatsoever.

The second evidence is that I certainly act unlike him. I always known him as a more dramatic person than I, and that can be quite evident. He also stated I was in a brief coma, of which I can confirm that I actually could not wake up for several days and thus was in a coma-like state.

Thirdly, while we share one common interest, that is where the line splits, as he absolutely hates some of what I do, and what I play. He also has a different type of art style that is vastly different, even from mine, as clearly evidenced by the first two Cremisi references before you and I split apart. He also does not play first person shooter games, whereas I do, and I play various other games, notably Indie, that he does not, as well.

Finally, a clear evidence is the comparison of our Creepypasta styles. HeWhoDiedHere has a significantly different writing style than what I have, and this can be evidenced by going back to one of his Creepypastas and comparing it to my Creepypasta, Bloodshot Eyes. We have drastically different writing types, in which I am more descriptive, thorough and grammatically correct than he is.

Is this enough or significant evidence that I deserve to be back on chat? What do you have to say about this, and I would like to hear what you have to say.

Attacking another wikia?  That doesn't sound like me  and if I was talking about cross wikia drama it was probably in pm with someone I Trust  do you even have any proof

edit: i was there long before i joined here  and i would never attack another wikia my feelings are hurt *sigh* i guess i'll see you in month then even though i was wrongfully banned

Edit2:  I went over  the rules again  and I never brought it up on main so  I didn't do anything wrong  and I was wrongfuly banned  so please take the time to fix your mistake

Hey, long time no see. I think you're pretty much the only one who knows my story Carbon River exists on the site, ever since I talked about uploading it a week or so ago. If you're still interested in reading it, there's a link on my profile. I'd love to hear your thoughts on it, but there's no rush. Thanks for your time!--Mikemacdee (talk) 04:15, March 7, 2014 (UTC)

I chagend it let me back please

I'd like to appeal the ban. Please don't ban me again. I met him and he told me about it. I am not gatlingpea12.

Hi, I was just wondering if you could proof-read my story. I hope I don't sound too rude or anything.

Don't worry, Chaoz. It's temporal and mostly preventive, as I said last night. Remember the other time I demoted you, one month ago? It's just like that.

If everything goes alright and as you want to, you'll have your powers back. Just let me talk to the people involved.

A huge offense to the chat rules last night: http://prntscr.com/3igqr7

You sure are a dick. Period.

Sorry for using the homophobic slur on chat yesterday. I'll try not to do that again. I promise. Guil Cat Lewis The one who follows you in the forest

I totally didn't steal your siggie

Retrieved from "https://creepypasta.fandom.com/wiki/User_talk:ChaoZStrider?oldid=782678"
Community content is available under CC-BY-SA unless otherwise noted.