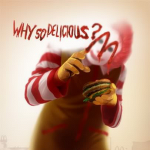 Hi, welcome to Creepypasta Wiki! Thanks for your edit to the Forest Phenomenon page.

A page you have made has been improperly capitalized and/or punctuated. Please refer to {{#NewWindowLink:CP:TITLE|the Style Guide}} for more information about titles.

I have taken the time to fix your title, as only admin, VCROC, and rollback users may modify titles. Because of this, I must ask that you adhere to the standards of titles, or the next time you will receive a ban on editing for a period of time as set out in {{#NewWindowLink:Creepypasta Wiki:Quality Standards#Page Titles|the rules about titles}}.

The third clown story  should be called The clown the paint and the revenge. I have an idea here it is: Continue by having melody having meeting ryan agian 10 years after escaping his grasp.

Hey dude! I'm glad you liked my new addition to the Collab. So far, it's been a really fun project to work on. Maybe the Creepypasta Wiki should this every year around Halloween. Hell, maybe they should do it every month. Anyway, thanks for the feedback.

I kind of lost interest, personally. I haven't read any of the new entries since Hitler. I'm sure the mods wouldn't mind someone ending it however they saw fit. There could always be a discussion about editing it later if someone isn't satisfied. Xelrog T. Apocalypse 23:40, October 9, 2014 (UTC)

I saw the edits, thanks for that. I musta missed the name change or gotten it mixed up. The project is coming along nicely and getting some input/contributions from users. EmpyrealInvective (talk) 19:23, April 10, 2015 (UTC)

It's fine. I came up with Indigo Valley originally but for some reason it was changed. Yeah I'm enjoying writing the sections! Elliot Cowling (talk) 19:37, April 10, 2015 (UTC)

And on the main page, make sure to check it out and see your handwork being showcased. EmpyrealInvective (talk) 18:39, June 7, 2015 (UTC)

Just letting you know that your idea was picked for the collab project. That means you get to write the introduction, unless you decline. I'd like to open the project on August first, but if you need an extra day or two, that's fine. Let me know.

Thanks Jay ten! I will get to work on the introduction! Yep. Should I need a bit longer I'll give you a message! When I've written the intro, should I post it on the existing collab page, or should we make a new official story page? Elliot Cowling (talk) 00:37, July 29, 2016 (UTC)

Awesome. Glad you're up for doing it. Feel free to message me on my talk page in the future (I noticed you did and then removed it). As for the page, I will create it on the first, and you can add it then. You guys can still use that thread to discuss anything you want in regards to the project. Let me know if you have any other questions.

Not a problem. I'm running a little behind as well due to a power outage. I'll likely go ahead and create the project page today, but feel free to add the intro at your leisure. Have a good one.

Hey, I just wanted to drop a message to hopefully get you on the discussion thread for a minute. Everyone seems to be on board with you picking the name of the town, and it would probably help everyone out to get it sooner rather than later. I would also like to have the intro soon so we can put it up on the project page. I feel like it might help give others something to go on and improve attention and activity on the project. Also, if anything has come up, please don't feel pressured to fulfill any perceived obligation with this project. We all know how it is when real life issues come into play. Adjustments can always be made. Just let me know where you stand on these things. Hope all is well. Have a good one.

Hey Jay Ten. Recently I have moved to university and sorted out the house etc. I am also unwell at the moment, and I have yet to write any of my sections. I feel so behind and I just haven't been able to find that inspiration given everything thats going on. I will choose the town name very soon. When is the final deadline for the project? I would still like to write my section/s when I can. Elliot Cowling (talk) 13:41, September 2, 2016 (UTC)

I know how that can be. I was moving out of the dorms my freshman year and ended up becoming the sickest I had ever been in my life (infected tonsils). It was not a good time. Anyway, the deadline isn't set in stone, but the issue is that the lack of an introduction and town name could be holding people up, I'm afraid. At this point I think I'll say there is no deadline unless everyone wants it on the front page for October first. If that's the case then the project will need to be finished a few days before that so it can be looked over. I definitely want you to write your sections as well. If you could let me know the town name and get at least a rough draft of the intro into the workshop sometime this weekend, then that would be great. If you can't, I understand, but I feel like that would get the ball rolling for everyone. And I could also delegate the introduction to someone else if you'd like, just let me know. Good luck with university, and I hope you feel better soon.

Another thing, feel free to message me on my talk page if you should need anything. I have disabled all email notifications, so if I don't notice that you've edited your talk page, I won't know you've responded. The thread will also work. Have a good one.

Hey, I've put out an updated version of my story Vernian Marble on the workshop. The important section is the intro which will act as the intro for the whole collab. I'd really appreciate your thoughts and feedback on that one section so it can be a solid reflection of your original intentions. Oh and the new version is posted as a comment near the bottom, not as an updated version at the top. I did this to keep both versions accessible for now. Let me know what you think ChristianWallis (talk) 15:58, September 15, 2016 (UTC)

Hey Christian. I like what you've done and I fully support it as an intro. I think it may need to be a little longer (maybe reference some more locations in the town) but apart from that it's great. Good job. Is the introduction going to be one part of your section? Or is it going to be separated into its own section entirely?  Elliot Cowling (talk) 13:01, September 18, 2016 (UTC)

He likely won't notice you've messaged him here since it doesn't send a notification for anyone's talk page except your own. Also, anyone can write multiple sections for the collab if they want, and I think Christian has already written others. I would advise either leaving the above message on his talk page, on the discussion thread, or message him and let him know that you've replied to his message here. Hope that makes sense. Have a good one.

Hey, I caught your message on the activity feed so no need to message me. And I'll definitely reference more locations as we see more. I thought of maybe including his description of his drive to integrate more locations such as Frank's golf course. And the intro will be separate from the other two sections, so Vernian Marble should work as a relatively standalone story but starting from the point where he reaches the mine. ChristianWallis (talk) 15:14, September 18, 2016 (UTC)

Retrieved from "https://creepypasta.fandom.com/wiki/User_talk:Elliot_Cowling?oldid=1230663"
Community content is available under CC-BY-SA unless otherwise noted.