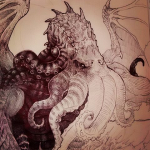 Hi, welcome to Creepypasta Wiki! Thanks for your edit to the Thread:532498|Pluto and Insomnia (unreviewed) page.

Hey jake,I revised the first part of my short story, "The Lurking man". It would mean alot to me if you could review it.Thanks!

Sorry it took so long to find your post.When do you think you`ll put the second draft up?

Jake! I haven't seen you online in a while.

How's things? Have you got any new stories in the works? You had some good ideas kicking around and I was keen to see you get your own story published onto the wiki.

No problem. I'll give it a read today.

Im flattered that you think that. I'm a little busy right now, so if I don't get it up today, it should be up tomorrow.

Do you have a link to it? I can't seem to find it.

Not sure why I'm using my phone to write this, but what the hell. I wanted to give you some kodos on how well you've taken criticism. It shows that you will have what it takes to become a writer if you really want to. Now, I've only ever read that one story of yours, so that's what I'm going to base my assessment on. Yes, there will be a lot of work to be put in, but if you enjoy writing, it won't be that hard. Your idea wasn't bad and, I'm going to assume that you're rather new to writing, you seem to be taking what people tell you serious. That's good.

Here's a little more advice for you: read anything you can get your hands on. Read mystery, horror, (seems like you already like those from what your profile said,) westerns, romance, non-fiction, anything you can get your hands on and learn from it. One of my favorite books is House of Leaves, it's strange as shit, the author says it's a romance, but it's such a great book that flips everything you've read before on its head. Another good book, if you want to get a better idea of structure would be Stephen King: On Writing.

You have thick skin, and that's needed to become an author. We all, every single person who has ever written, write some really bad shit when we first start out. But with writing more, reading more, and the magic of editing, any turd can be polished.

That's not to say that every story should be worked on for hours, but I think you get the idea. Also, I wasn't saying that your story was a turd, just an expression and I think that story could become really well received here, once all the wrinkles are ironed out. Just remember, when you edit, you're god. Anything you want to happen to those people and things, can happen.

Anyway, didn't want to leave this on the post. Good luck to you man.

Of course I can. I have what I'm doing done now and should be able to review both, as they're both quite short.

Sorry about not being around to help out with your story, man. You probably noticed, but I haven't been on at all for a few days. Good luck in the contest. Hope you had a great Christmas.

Don't link to gore, even if you put an NSFW warning. It's against Wikia's ToU and our rules, and you'll be banned if it happens again.

Sorry mate. I shouldn't have put you to mutilated-leg lengths.

Hmm...do you know how to use the signature?

Letting you know that you've forgotten to include your name in Of Things That Lurk Caverns Deep. RaptorKillerX-Venture (talk) 13:09, February 9, 2017 (UTC)

Emps broke down the party

The fact that you can't comprehend the complexity and true meaning of my username shows your level of ignorance.

I literally had one edit on that wiki a few years ago. Shit wiki (you can get banned for cursing) but fun game. Also, I had something a bit more shameful that I erased, though I don't remember what it was.

Why've you got to make everything into a competition? Now, the ones you mentioned seemed pretty good, but I prefer things like "What is that? Let's just fuck it!" or "Patients spreading, and not just cancer!" and "Life is all around ass, but roots are only in our orifices".

Brother, I've seen lots of weird shit. I'm pretty sure I can't link you to over half of it.

That's the vanilla part, sonny. I thought bout sending you to a video of a guy making an incision into a Pokemon plush toy's ass, removing stuffing and putting in a fleshlight. You can guess what the fellow did next.

Oh, so cute! You thinks you're people. Let me tell ya somethin'. If I truly were to make such a video, I wouldn't put it on Youtube. My philosophy is, "The more fucked-up, the more expensive".

"Don't you dare deny that wasn't you."

I won't deny that wasn't me, obviously, I'm guessing that statement means you're sharing your obscure hobbies with me. I politely decline that.

I just realized that we had the same amount of edits during the time of this posting, coincidence or not? I require your thoughts onto my latest work that's currently being submitted onto the workshop at the moment. RaptorKillerX-Venture (talk) 00:10, February 17, 2017 (UTC)

Hey there Jake, I do remember you (and your story)! Thanks for your understanding about my leave, things are better now. So it'd be no problem for me to take a look at your new pasta, and I can probably do it some time tomorrow if that's okay with you.

I look forward to it!

Unfortunately tonight I have to devote my time to some college work, but tomorrow I can definitely sit down and tell you what I think of the new draft if that's fine for you.

Apologies for the delay boss.

Just to Be Clear

Apparently that link was breaking our tight-ass Terms of Use, so I just wanted to let you know not to send anything like what I did in the future because I don't want you getting banned for it. No need for a response, just wanted to make sure you knew. Have a good one.

No worries, my friend. I have no regrets. I watched it twenty times and laughed every time.

Hey mate. Don't know if ya remember (or even seen) the drop of salt I received a short while ago, but here's the update. Thought you might get a kick out of it.

The mentions of how we "discreminated" against her and saying it's "UNJUST" made me think she's SJW, though she could also be a SJW (with S from shitness). Also, the bits about life stories and fairy tales made me wonder... are bubbles of random assumptions a sign of chronic stupidity?

And don't think I didn't notice ya pulled the old sneak dick trick on me. I'll get to your story right away.

She could want us to call them snowgenderfluids, I don't give a fuck as long as I can keep my snowballs.

Uhm...dude, you, as a regular user, aren't actually allowed to remove the template yourself no matter how much you edit it.

You are an extraordinarily strange person. But then, isn't everybody?

Mah man, your a master of not giving a fuck. If you'd have just read the messages on their talk page you'd know now that all of that has been covered. Also, people tend to just urge to tell you know in the futile hope that reminding you would make you become less weird.

You ironically forgot to sign again. If you look at this hilarious thread (hillarious because I'm in it), they might be a female. Also, as they said, we're all strange. On top of that, I'm also immoral, obscene and hillarious, which don't derange me in the least. Don't know if I can say we're friends yet, but I don't like genuinely annoying people I don't hate, especially if they're young. Also, Shawn, Miss Dupin, Empy, Jay, and Raidra are all adults. If you're implying that I'm a future pedobear...I have no comments.

I was sarcastic, simpleton. You have gone soft. Anyway, read 'bout the hiatus. Hope it ends as soon as it starts.

Hey, try not to change the wording in a story. In the case of Johnathan's story he was perfectly entitled to use the word 'release'. It was in no way an error and the subtle change to 'relief' actually impacts the meaning of the story. Relief is what you feel when your mum fails to notice the bag of weed on your bed. Release is the feeling you get when you take a shit after holding it in for 2 hours. There's a distinction between the two, and authors choose specific words for specific reasons. Also, I'm sorry I haven't gotten around to reviewing your story. I'll make a start on it today but I've been busy during the last month or so with work and uni ChristianWallis (talk) 13:40, April 20, 2017 (UTC)

I'll try to get to it soon. I am going through and reviewing the unreviewed stories before too much time passes so it might be until the weekend, but I'll try to make the time. Have a good one. EmpyrealInvective (talk) 23:53, June 15, 2017 (UTC)

No problem, that being said, I did bump you to the top of the review list so I'm probably going to spend some time getting the other reviews cleared out before returning to your second draft. Please remind me in a week or so if I haven't gotten to it by then. Unfortunately things are a bit busy on my end so I can promise a speedy response. EmpyrealInvective (talk) 18:03, June 18, 2017 (UTC)

Where have all the eldritch monsters gone?

Hey, simpleton. Since you've been a wreck regarding your overall activity, I wanted to check your devices. How's been life treating ya?

Well, there's the 2 Discord chats if you ever wanna chill. Maybe we can see bout that school thing. I'd try to explain everything that happened in the meantime in detail, but this about sums it up: "Oldies left, oldies return, new Messiah Ben Fugman and the Slavs took over."

You were selected for one of my random writer's showcases, you can read your own showcase here.

No problem man, it was a breeze. I should probably be the one saying "Thanks for writing the stories I showcased" all things considered.

Retrieved from "https://creepypasta.fandom.com/wiki/User_talk:Jake888?oldid=1295088"
Community content is available under CC-BY-SA unless otherwise noted.