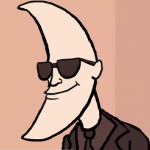 Hi, welcome to Creepypasta Wiki! Thanks for your edit to the Talk:Jeff Is Back page.

Hai Someguy, here is our ideas that we had the other day.

Also, I support you on the Trollpasta Rollback Brigade

You are banned from chat for One Day for the following reason: Being racist

I will upload this with my signature, everytime you are online and I want to talk to you...

Hey, Have some ponies

Excuse me, i'm requesting a "John and Issac Creepypasta written by you. I really enjoyed your Ed, Edd n Freddy story and i was thinking what could you make out of my show on GoAnimate, that's for you to decide :)

Here's a link to my episodes and profile on GoAnimate: http://goanimate.com/user/0aCsiduTeQNM

Hey, Messian thinks I'm CrashingCymbal! Tell him otherwise, would ya?

When posting stories from /nosleep on here

Thanks for the edit on my pasta! :)

Hmm... KI Simpson does appear to be the original author, though I have yet to find the supposed original posting on gamefaqs. The most we can do right now is {{by|KI Simpson|link=www.gamefaqs.com/users/KI_Simpson}}. LOLSKELETONS (talk) 20:56, January 9, 2014 (UTC)

Lol, they must have been using the mobile version of this site. It has a new feature that displays the last person who edited the page ("Last edited by X on time"), which people seem to mistake as the author of the page for some reason.

Just thought you might find some of these templates useful:

Retrieved from "https://creepypasta.fandom.com/wiki/User_talk:SOMEGUY123?oldid=630708"
Community content is available under CC-BY-SA unless otherwise noted.