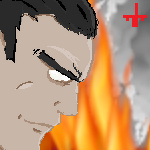 Hi, welcome to Creepypasta Wiki! Thanks for your edit to the NES Godzilla Creepypasta page.

I should've clarified slightly more on that. When I say rip a person down, I don't mean call them names. I don't mean go into the street and say you're going to beat the shit out of them because they wrote something sucky. I mean tear their work to shreds. If it's bad, I still fail to see how it's agressive to say so.

Alot of those teachers you see on Hollywood movies that are even remotely close to good will sit there and tear up the student's homework and toss it in the trash if they do it crappily or put no effort into it. Most of the time that's what the case is here.

So, why should this wiki be any different? I have several times said that if you ask me to criticize something, I'm going to criticize it. I forewarn. I do these things. I come up with a lot more result from agressively tearing apart someone's work than I do saying "This could use improvement, here's what's wrong with it." What's next? Am I supposed to put a disclaimer telling others not to ask me to criticize because I'll do it full way rather than "neutral" or "nice", but tell them what I actually think of it?

The primary reason a butthurt response comes up is because they're butthurt said story got deleted in the first place, before I criticize. Usually, the times I criticize nowadays it is because a user has asked. Not because of the deletions, because as I said, I tend to ignore rants on talk pages or in chat.

I don't really know anything about this, but I think I've seen people upload audio files before. I believe it is possible.

I personally wouldn't have a problem with including such a site in the "CPW Network". Try starting the wiki first and then spreading the word around to see what people think. Then we'll see about acknowledging it.

...anyway, stay on topic and let the matter drop. Thank you.

Yes. 'Murica. I live here too. However, this site isn't quite like that. Another admin bought up the analogy of this site being like a restaurant. So I'll use this simple example so you can glean what I am getting at. With a restaurant, you're free to go in, order whatever you like, and enjoy your meal and drink. But once you've had too many whiskey shots, start smoking, playing grab-ass with the waitresses etc, you'll be asked to leave. Hell, maybe the cops will be called too! If that happens, there is a big rift between Johnny Patron and John Q. Law. See what I did there? The same holds true here, regardless of any First Ammendment beliefs our country drafted before the interwebs. Anyway, does that make it any more clearer to you? Golly-gee, I really hope so.

TL;DR - No one wants to see drama, so we tend to eliminate it before it becomes a problem.

The community governs the content. Psst, that's all of us! Admins just have a few more administrative rights to keep things tidy around here. I kept reading your response, trying to see where I said I was this guy.

Anyway, missed and/or misinterpreted analogies aside, I do see where you're coming from. However, when fans of the stories that that user was essentially bashing start flooding the comments with "NO WAI, FUK U" remarks, yes, I'll step in and put a stop to it. Every time. Ever read the comments in JtK? Use that as another analogy if you'd like.

Have a good day.

Ahh. Okay. Yeah the one you posted there is fine. I was talking about this http://tny.cz/d798f5ae. If you don't feel like reading it, I really don't blame you. It's hard on the eyes.

Anyway, sorry for the mix-up and the words. Take care.

Decided to just leave a message here so Callie's page wouldn't look cluttered. But yeah, why not start at rollback and work your way up from there? As long as you start some dynamic activity around here, I can't see a problem with you getting those rights, and even higher ones down the road. Go and fill out an app, and we can move on from there. Mystreve (talk) 11:12, October 3, 2014 (UTC)

Hey mate. I think we should decide the ending for the Collaborative Project as it has gone into hiatus! There's no activity happening there at the moment.

Since I've not had real time to keep up, does the Writing project have a solid ending? If so, then I'll try and get the title suggestion thread up. If not, can I ask you to attend to this? That One Freaky Producer Person 06:26, November 2, 2014 (UTC)

If you're still interested in the Duke Nukem games, let me know. You'll get both, because they're very old and very cheap on Steam. --ImGonnaBeThatGuy (talk) 23:05, December 9, 2014 (UTC)

Yeah, absolutely. You can either come on chat and I can give you the links that way or give me an e-mail address and I can send them to you. --ImGonnaBeThatGuy (talk) 23:32, December 9, 2014 (UTC)

Not a big issue. (The uncategorized page list is actually quite low. I am patrolling it every now-and-then to make sure it doesn't jump back up to 1000) I also tried to adjust the dialogue quotations, which you may want to look over and decide if you want it that way or not. Have a good one. EmpyrealInvective (talk) 18:35, March 29, 2015 (UTC)

Hello! I have a spanish youtube channel. I was wondering if i could translate and narrate your story: Anima. Obviously i'll give you the credit and leave links to your post and your profile here

Retrieved from "https://creepypasta.fandom.com/wiki/User_talk:Xelrog_T._Apocalypse?oldid=1423329"
Community content is available under CC-BY-SA unless otherwise noted.