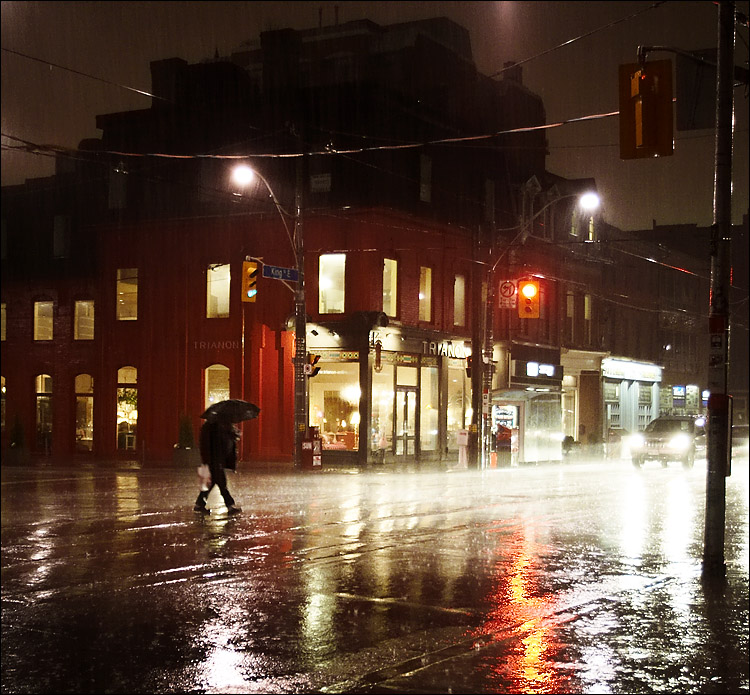 It begins gently, at first, softly falling like a child’s tears. It is a sad thing, but not so unusual and wholesome in its way. And the wind lightly blows, almost tenderly caressing your face. This will not last, but it’s nice, isn’t it?

In the beginning there were two and they knew love of a kind.

The rain comes down harder now, no longer a child’s gentle weeping, and not quite an adult’s passionate cries for a lost love. It is somewhere in-between.

Then the wind picks up, catching your hair, causing it to fall across your face. It speaks, in the way that wind speaks: a soft moan, nothing more yet.

Time passed, and the two brought forth children. The children built and bred and grew. Thousands, then millions.

The rain has not changed. It does not fall with greater intensity, but in the distance, the faint sound of rolling thunder and the flash of a great light. The voice of the wind calls out to it; the clouds gather more strongly.

The two were not man and woman, but that is close. In the full distance of time, they grew apart, and so their children suffered. She was not happy with Him, but She would not leave Him.

The rain falls strongly now; if you were not wet before, you are now. The wind’s moan has changed to a howl, and the lightning grows closer. The air is charged with possibility.

She loved them, but to Him, they were a barrier, something that caused the coldness that had grown between them. Perhaps that is why She said nothing when they drove Him out.

The storm is a storm in truth now, the rain stinging a little as it falls, water dripping from your hair. The wind’s howling pierces your clothing, finding any gap and driving itself through it, perhaps seeking your warmth. You should find a shelter, but something is about to happen.

Generation upon generation grew, lived, and died. They forgot Her name and His. She was still with them, though, and they still loved Her, in their way, but He, they lost entirely. He watched from beyond, unable to touch Her. Sometimes, He lashed out at the skies.

The lightning is close now, illuminating the entire night sky, the thunder crackling within a minute or so of the lightning. It should feel cold, shouldn’t it? The wind is strong and the rain is fierce, but you are not cold. There is an energy building.

A crack has formed in his millennium-old prison. He feels it and rages against it, throwing His might towards it. The crack widens.

You stand there, silently staring at the raging heavens, as lightning cracks open the vault of the sky. The lines of light hang suspended in the air, after they should have ended. Something is coming.

He feels freedom. He goes to it; soon, He will be with His bride once more.

Credited to Jreinstatler
Retrieved from "https://creepypasta.fandom.com/wiki/When_Rain_Comes?oldid=1418892"
Community content is available under CC-BY-SA unless otherwise noted.