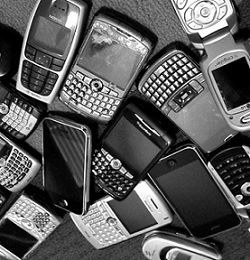 Somewhere in the inescapable depths of suburbia, a cloaked man walked alone down a dimly-lit street. Icy drops of rain dripped from the edge of his hood onto the rims of his sunglasses, cascading down the lenses and eventually dropping into oblivion. He strode with purpose, quickly and cutting corners across lawns, muttering to himself in a tongue only the desperately insane would comprehend. Upon arriving at his destination, he hungrily eyed the second-story windows of the house that stood before him.

A flicker of movement caught his eye. He stood dead still, a cat stalking its prey. A single light flickered in the basement window; a candle, perhaps. The man retrieved his cell phone and double-checked the address sent to him; or rather, who he had pretended to be, and tucked it back into his breast pocket. While innocent and playful curiosity had initiated this dark situation, a fully developed obsession had brought it to its climax. Who ever thought a wrong number text could be such a grave mistake?

Smiling, the dark man entered the backyard and attempted to open the back door. It opened a quarter of an inch and then stopped.  He sighed heavily, his breath rushing out in clouds of warmth surrounded by damp cold. He stuffed his hands into his pockets, rummaging through their contents until he found two silver tools. With practised hands, he manipulated the pins of the lock. Within a minute, he was skulking in through the back door, drenched with rain and anxious sweat.

As quietly as possible, he removed his cell phone from his pocket and cast the coat aside. The man’s large, thick fingers danced over the touch keyboard, spreading a thin layer of water over the screen as he typed out his message:

A wide, malicious grin spread across his pale face as he waited patiently for a response.

COME ON RIGHT IN, THE FRONT DOOR’S OPEN. IT’S BEEN SO LONG SINCE I’VE SEEN YOU.

He placed the phone in his pants pocket and surveyed his immediate surroundings. He stood in a wide hallway; a stairway leading upstairs at one end and two doors on the wall at the other. Behind him was the door to the backyard, and slightly farther down the same wall was a closet. He heard the faint echoes of a television on low volume coming from somewhere upstairs. Thick, stale air filled his lungs and shakily, with wavering fingers, he drew the 6-inch blade he’d brought specially for his friend.

Slowly and weightlessly, he crept up the stairs, just another shadow lurking in the old house. Once in the living room, he spotted the glare of the television around the corner. A late night TV special, it sounded like. A human figure rested lazily on the couch, its eyes fixated dully on the screen, unblinking. The man brandished the knife behind his back and approached the shape. It turned toward him, confused.

“Hello, my old friend.” The voice of the man who was standing was rough as if he’d been crying, but still menacing enough to alarm the sitting man to an extent. He advanced and aimed the tip of the knife directly at his poor victim’s throat. The young man on the couch squirmed in his seat, but lethargically so and made no move to defend himself, nor escape. The knife slid cleanly into his jugular, severing it completely along with his carotid artery. It was the work of a professional. The sleepy gaze returned to his face as he slumped over, blood soaking his shirt like a towel under the tap.

“I’m glad to see you could make it.” A smooth, calm voice echoed around the halls. The man froze in his tracks. “Which one were you?” The voice’s owner appeared at the top of the stairs, a tall and lean silhouette against the light from below. “Oh dear, where are my manners? Please forgive me, but you’re the fourth this week and I keep losing track of the names I’ve been asking for. You were… Howard, weren’t you?” The man stood there, his jaw slack and limbs numb while the silhouette continued to speak.

“You’re probably confused; most of them are. You’re going numb, aren’t you? No, that’s not nerves. Well, it is technically nerves,” the silhouette chuckled to itself. “You came in through the back door, right? Well, I thought I would tell you in person rather than text you that wired to every door are tripwires designed to release poisonous gas when triggered. It’s a sort of sedative designed to keep you just conscious enough to feel pain. I was safe downstairs while you were breathing it in. There was just enough time for you to get the correct dosage and for the fumes to dissipate to make my appearance.”

The man began staggering towards the increasingly terrifying silhouette, his movements halting and mechanical, his muscles struggling against themselves. He collapsed in a writhing heap halfway across the room.

“You don’t mind if I clean up first, do you? Surely, you wouldn’t want to sit in all that blood on the sofa. It’ll just be a little while longer until I can help you off the floor, is all. Oh, and do you have a preference for television channels? I’ll let you watch anything except MTV. I hate MTV.”

Retrieved from "https://creepypasta.fandom.com/wiki/Wrong_Number_Texts?oldid=873614"
Community content is available under CC-BY-SA unless otherwise noted.