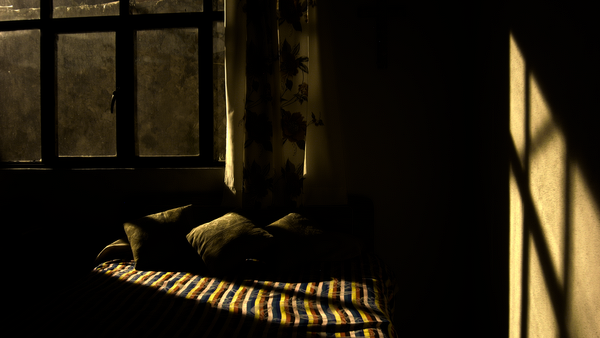 You are lying in your bed. The dull whirring of your air conditioner is the only thing separating you from total silence.

The dull whirring is the only noise you can hear, a noise that typically goes unnoticed, until it is the only noise present. It’s comforting, whether you realize it or not. A sort of white noise. But suddenly, your room is back at the temperature specified on the thermostat, and the whirring comes to a stop, as the vent makes a dull clang. To your misfortune, you are not yet asleep, and the silence sets in.

You should be comforted by the knowledge that you could hear anything and everything in your surroundings, making up for the lack of vision provided by the darkness. But you aren’t. It’s this very environment that sets you on edge, causes your heart to beat a bit faster, makes your body tense without explanation, and makes you aware when you are not alone.

But you are alone, right? You’ve been laying there with your eyes closed for almost 15 minutes now, and you made sure everything was normal in your room before you turned off the light; you’re a smart one.

All those Facebook quizzes you took have just reinforced what you already know. If you were in a horror movie, you’d survive until the end. You've even made a carefully laid-out plan of what you would do in any of the situations you've read about in Creepypastas. But that stuff is just nonsense anyway, right?

You aren’t scared. Or, at least, that’s what you keep telling yourself.

But wait…what was that? Was that the rustling of fabric? You didn't shift in your bed, or make any movement. Did you make that noise? No, you couldn’t have. You’re paralyzed in your bed, stiff with an unease that was not present until these very moments. You must have imagined it…you must have.

You roll over to face the wall. Out of sight, out of mind. If there’s something in the room with you, it will just have to accept that you are much too tired to deal with it at the moment. You’re still stricken with uneasiness, as you hear rustling again. This time, the rustling is accompanied by a soft thud on the ground.

Your heart seizes in your chest. Did you really just hear that? No no, you've just gotten yourself worked up about nothing. You really should stop playing horror survival games so late at night; it’s messing with your brain. You’re a rational person, so stop acting so childish and just fall asleep already.

You close your eyes tightly, silently hoping sleep would whisk you away soon. You’re practically begging for the safety of the nonexistent dreamworld of your own creation. You’re running away in a sense; but there’s nothing there…right? You’re just tired! I know, I know.

As your eyes are clinched tightly shut, you become aware that no matter how much you want to, you can no longer move your arms and legs. Come on now, are you really letting this get to you? What are you? 12 years old? Suck it up and fall asleep already!

Now, more tense than ever, that unnerving sound echoes across the room again. The rustling of fabric, followed by a soft thud on the ground. Unwittingly, you’re holding your breath now, eyes shut as tightly as possible. You have the childish urge to pull the blanket over your head. You’re imagining it all! It’s all in your head; I thought you were better than this.

You heart is pounding loudly in your ears now, but not loudly enough to drown out the now-repetitive sound approaching from across the room. What’s that rustling!? Maybe you left some paper on the ground. That has to be it! And that thumping? Probably the cat, or the dog, or something. They probably ran in when you weren’t looking before you closed your door. Yeah, you’re just paranoid.

Minutes that feel like hours pass as you face your wall, stiff as a board, unable to will your uncooperative body to move. You haven’t heard the noises in a while now, not since it reached the edge of your bed. You know there’s nothing there you silly. It’s this silence; it’s messing with you. You really should have turned on some music or something before you went to bed.

Suddenly, a familiar clang echoes through the room, followed by that familiar whirring. You exhale deeply, your body relaxing as you are flooded with relief. Thank God that’s over. Now, you can finally sleep in peace. That silence was really getting to you. You roll over and open your eyes to check the time on your lit cell phone; it must have been at least an hour since you...

You are greeted face-to-face with his ear to ear grin. Dimly lit sockets where eyes once resided stare intently at you.

Retrieved from "https://creepypasta.fandom.com/wiki/You%27re_Not_Scared,_Right%3F?oldid=654476"
Community content is available under CC-BY-SA unless otherwise noted.